Dr. Dan Hays, distinguished pediatric surgeon, scholar and father, passed away quietly at his home in Riverside California on April 7, 2016 at the age of 97. 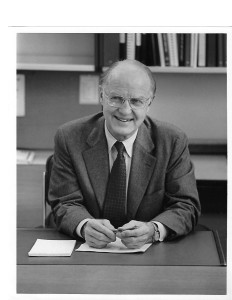 Dr. Dan Hays, distinguished pediatric surgeon, scholar and father, passed away quietly at his home in Riverside California on April 7, 2016 at the age of 97. Dan was a pioneer in academic pediatric surgery and will be greatly missed by his family, colleagues and friends.
Dr. Hays was born in Reading Pennsylvania while his parents were visiting his mother’s childhood home. His childhood was spent in Riverside California where his father was the owner and editor of the Riverside Press-Enterprise, a respected daily paper. The paper was owned and operated by the Hays family from 1969 until 1997. In addition, the Hays family was the owner of the Glacier National Park Transportation company and Dan spent his summers living in East Glacier, MT between the ages of 8 and 21 years, ending in 1941. A childhood spent growing up amongst the writers, editors and reporters of the newspaper, along with the drivers of the red cars on the Road to the Sun in Glacier park, likely led to his life-long curiosity, and extraordinary accomplishments as an academic pediatric surgeon.
Dan completed his undergraduate education at Stanford University in 1941. He enrolled just prior to the war at Cornell University Medical College graduating in 1944. He was a captain in the U. S. Army Medical Corps from 1941-1947, serving during his medical training, and later in post-war Germany.
Dr. Hays developed his interest in pediatric surgery during an internship at the Boston Children’s Hospital from 1944-1945. During this time, he was trained by Dr. William Ladd, Robert Gross, both significant figures in the history of pediatric surgery and Sydney Farber who was pioneering the use of chemotherapy in children. Dr. Hays went on to train in pathology at Peter Brent Brigham hospital 1947-1948 and subsequently completed surgical training at New York Hospital 1948-1954.
He met his wife, Esther Fincher Hays, when they were both residents at New York Hospital, and they were married in 1951. In 1954 they moved to Los Angeles, and he joined the staff of Good Samaritan Hospital and then Children’s Hospital Los Angeles.
Dr. Hays practiced academic pediatric surgery at Children’s Hospital of Los Angeles from 1955 until his retirement in 2001. During this long tenure, Dr. Hays had many accomplishments, but the most sentinel one was his impact upon how children with malignancy were treated. He recognized that children with lethal malignancies would benefit from standardized surgery, and combinations of surgery with other modalities such as chemotherapy and radiation. He also identified that many childhood malignancies that appeared to be single entities represented different diseases based upon location of the tumor, histology and other markers. This was the early phases of what is being pursued today as precision medicine.
Dr. Hays was successful in broadly engaging pediatric surgeons in the Children’s Oncology Group, the Intergroup Rhabdomysarcoma Group and other entities to standardize surgery, and surgical care of children over 20 years as the chairman of these important efforts. The impact of this work was significant around the world as pediatric surgeons in Japan, Europe and Australia accepted Dr. Hay’s work. His work not only led to improved survival of children with cancer, but he also contributed to the knowledge of the impact of childhood cancer upon survivors through his long term follow up clinic and studies of the impact upon these adults.
He was a continuously funded investigator for the NIH for over 30 years and was published extensively in the scientific literature.
“More than any one individual, Dan Hays helped set the standard for the specialty of modern pediatric cancer surgery,” said Stuart E. Siegel, M.D., former head of the Division of Hematology/Oncology and director of the Children’s Center for Cancer and Blood Diseases at Children’s Hospital Los Angeles, and professor of pediatrics at the USC Keck School of Medicine.
Dr. Hays had a very significant relationship with many Japanese surgeons and fellows over the years of his career. His interest in liver disease led a mid-career sabbatical in Japan where he learned about the Japanese approach to children with biliary atresia, studying with Dr. Suruga and Kasai. This experience led to a book published by Dr. Hays which led to the adoption of the Kasai procedure in the United States with much improved results.
In recognition of his many accomplishments, Dan received the Coe Medal from the Pacific Association of Pediatric Surgeons in 1994, and the William E Ladd Medal from the Surgical Section of the American Academy of Pediatrics in 2004.
Dr. Hays is survived by his wife Esther, son John Hays of Santa Monica, daughters Sarah Hays of Los Angeles, Elizabeth Hays of Mount Vernon, Maine, Margaret Hays Van Kan of Auckland, New Zealand and seven grandchildren.
The family asks that in lieu of flowers, memorial donations be made to The Children’s Oncology Group Foundation, 3720 Spruce St. No 506, Philadelphia, PA 19104.