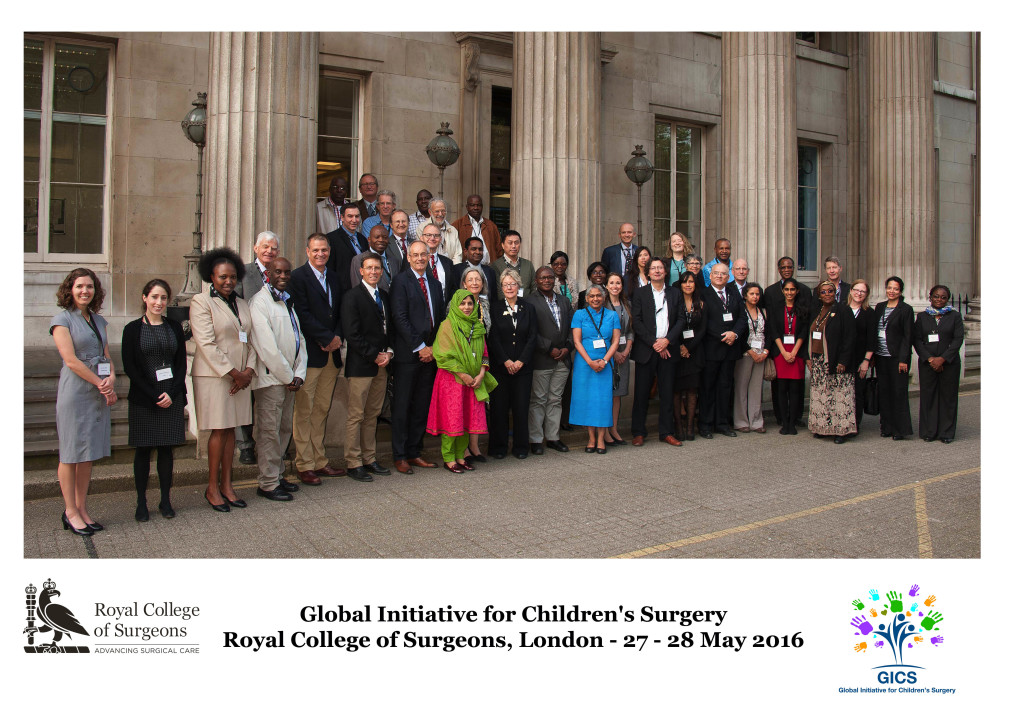 The Global Initiative for Children’s Surgery (GICS) is composed of children’s surgical providers who passionately believe that every child deserves the best surgical care when they need it, without causing the impoverishment of their families.

The first GICS meeting took place at the Royal College of Surgeons in London, UK on 27-28 May 2016, and included 27 providers of surgical and perioperative care for children from 18 low- and middle-income countries. Its aim was to identify solutions to problems in children’s surgery, drawing upon the expertise and experience of practitioners from around the world.
It started with a review of themes drawn form a pre-conference survey , specialty presentations by plastic, urological, neurosurgical, general, rural, and orthopedic surgeons, as well as an anesthesia and critical care providers, detailing country- and specialty-specific barriers to care and potential solutions.
Four working groups of providers were then created to prioritize solutions to children’s surgical care. The priorities from the first day were refined on the second day, with a different group of participants. Consensus solutions included:
Infrastructure: Establish standards, including one children’s hospital per country and standard instrumentation suggestions; integrate these in the national health/surgical plans.
Service Delivery: Stratification of care by level of hospital with set procedural standards at each level and improved triage; standard numbers of providers per population; improved prenatal diagnosis, health promotion, prevention, delivery, and rehabilitation.
Training: Designate, accredit, and support regional training hubs to cover all children’s surgery specialties; standardize training curricula, aligned with existing professional colleges; provide scholarships for trainees and trainers; develop regional and national Children’s Surgery Centers of Excellence.
Research: Establish regional research centers to support data collection, IRB, grants, and training; simple, uniform database for quality improvement and research; prioritize research in birth defects, tumors and pediatric injury including burns.

The way forward includes further needs assessments, a Consensus Statement on optimal resources and best practices for children’s surgical care, and a follow-up meeting (October 2016 in Washington, DC) aimed at connecting the LMIC providers with professional associations and non-government organizations willing to assist in matching global resources to the identified needs and solutions.

Here is an overview of the meeting prepared by Ashika Morar

From 27th-28th May 2016, I was privileged enough to volunteer at the first Global Initiative for Children’s Surgery (GICS) conference. I had the opportunity to listen to the talks given by the delegates as well as discuss the topics and issues with them. The following points that I have gained from my experience are summarised below.

The issue of centralization was highlighted during Dr Saldana’s presentation, but was one that I encountered throughout the conference. Although there were trained doctors, there needed to be a better spread of resources and services to ensure that all children could get equal access to health care especially those in rural areas.

One of the most compelling talks of the conference was given by Dr Luc, about the situation in the DRC. Out of all the countries in attendance, his situation seemed to be the worst. His point about the state of education impacting the future of healthcare in the DRC, “If there are no schools, how can we train doctors?”, was the most hard hitting point of the conference in my opinion. I am very intrigued to see how GICS can help him and how he and the DRC progress in the future.

Dr Maduri’s talk on outreach programmes was one of the talks that really stood out for me. The idea of a government funded program that sends out doctors to train in rural areas was something which made me think, “Why has this not been done before and if it has, why has this not been implemented everywhere?” In a country like India, where there is a large population, the success of screening process for childhood abnormalities was very inspiring and showed that it was doable and could be implemented in other countries.

Reluctance of doctors to return to home countries

When speaking to delegates of the conference, I learnt that quite a few of the were having issues with sending their doctors abroad to train and the newly trained doctors then remaining in the country instead of coming back. This costs their government a lot of money and also causes the healthcare services to suffer. Low salaries and better resources can cause doctors to try to remain abroad rather than returning to their home country. When speaking to the delegate from Papua New Guinea, he spoke about how he was not concerned about the resources but the drain of doctors from his country to Australia. Maybe a scheme like the military’s could be implemented in a situation like this. The government could pay for the doctors to train abroad, however the doctor must come back and work in the country for a set number of years.

I had not thought of the importance of infrastructure in relation to healthcare until this conference. After watching the presentations and sitting in on one of the breakout groups on infrastructure, it came to my attention that it was not just good facilities that were needed but access to them such as roads. Furthermore I was made aware of the difference of the definition of a children’s hospital in a LMIC compared to a HIC.
This conference has definitely identified various issues around the world and I am very interested to see how GICS can help to solve these in the future. I believe the essence of GICS and its outcomes can be summed up by Dr Bothwell; “When life puts you in a hard place, learn to thrive”.