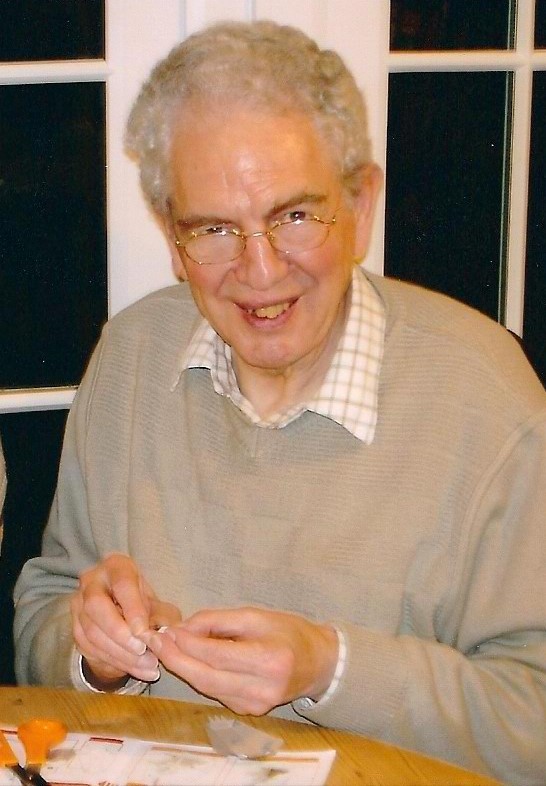 James was born in Nairobi Kenya on 24th March 1931 where his father was Headmaster of a Church of Scotland mission school in Tumutumu. The young James was home educated in Tumutumu until the family returned to Scotland in 1937 to arrange for James’s schooling. James was to be cared for by his aunt, who worked as a community paediatrician and lived near Paisley. James’s parents and baby brother Hector soon returned to Kenya. They would normally have returned on leave in 1943, but the war had intervened and prevented the family’s return to Scotland until 1947.

James successfully applied to read medicine at the University of Glasgow to start in 1947, aged 16. Remarkably, James was joined there as a student by his father, who began Divinities studies at Glasgow University on his return from Kenya. That was a momentous year for James, reunited with his parents, getting to know his ten year old brother, and beginning his medical career.

James graduated MBBCh in 1952, and worked in Glasgow until being called up for national service. He joined the Royal Air Force, and served as a Flight Lieutenant in Aden, Egypt and Cyprus, working as a family doctor within the forces. After national service James worked as Senior House Officer in Glasgow and also at The Royal Hospital for Sick Children in Edinburgh. In Edinburgh James worked as an Anatomy Demonstrator at the University until he was appointed to the Glasgow surgical Registrar rotation in 1959.

James rotated to Dumfries in 1960 where he met Jean – who was a surgical house officer – when Jean observed James pinning a femur. James returned to Yorkhill in 1961 sitting successfully, at the first attempt, his Edinburgh and London College Fellowships in Surgery and marrying Jean, all within a matter of months. James and Jean both worked at Yorkhill until the summer of 1962 when they went to Ibadan in Nigeria for one year where James worked as Senior Registrar in general and paediatric surgery under Professor Will Davey.

James was appointed Senior Registrar in Paediatric Surgery in 1965 at Great Ormond Street Hospital in London under Professor Andrew Wilkinson, and later he became Resident Assistant Surgeon. With Andrew’s blessing James accepted a two-year Consultant post in Uganda in 1969, charged with developing a paediatric service in Kampala. James and Jean, complete with Graeme and Rosie in tow – aged 3 years and 1 year – decamped to Africa. As it happened they returned only a year later, as James was appointed to the Senior Lecturer post at the Institute of Child Health plus Honorary Consultant in Paediatric Surgery at Great Ormond Street. This expedited return to London was very fortunate for the Dickson family as only 3 months after they left, Major Idi Amin launched a military coup in Uganda with serious consequences for many, including some foreign nationals.

In January 1980 James was appointed Consultant Paediatric Surgeon at the Sheffield Children’s Hospital, where James was increasingly able to sub-specialise in paediatric gastroenterological surgery. James was renowned for his meticulous attention to detail, as well as his care and compassion for his patients and their families.

James established a connection between the Children’s Hospitals in Pécs, Hungary, and Sheffield. In 1971, James had become a good friend of Dr Andrew Pinter – later Professor of Surgery in the Children’s Hospital in Pécs, Hungary – when Andrew Pinter was researching with Professor Andrew Wilkinson and working for a year at Great Ormond Street Hospital. The two surgeons kept in touch, James visited Pécs regularly and contributed to their scientific and educational meetings. Their continuing professional ties led to the appointment of numerous trainee paediatric surgeons from Pécs to work in Sheffield at registrar level for up to two years from 1985. This association has continued after James’s retirement. These trainees are now the “new” Professors and Consultants in the Children’s Hospital in Pécs, and this Pécs Team have expressed their gratitude for James’s friendship, good teaching and mentorship.

James’s working role was enhanced by long service as an examiner, both for the Diploma of Child Health for the Royal College of Physicians and for the surgical Fellowship of the Edinburgh College. James served for a period on the committee of the British Association of Paediatric Surgery and was a founder of a charity to support the families of those with tracheo-oesophageal fistula (TOFS).

James retired from surgery in 1996 but, as anyone who knows James Dickson, he did not stop working. James returned to demonstrating Anatomy at the University of Sheffield for five years. He also contributed greatly by continuing to serve Sheffield Children’s Hospital on the Planning and Refurbishment Committee for the major hospital refurbishment which was starting as he retired.  James had been appointed an Elder of St. Andrew’s United Reformed Church, Church of Scotland, soon after his arrival in Sheffield. In his retirement James served as the Church Secretary and edited their monthly magazine – The Messenger.

None of his many roles were as precious to James as being a dedicated husband to Jean, a supportive father to Graeme and Rosie, and an endlessly patient and loving grandfather to Callum and Alex.