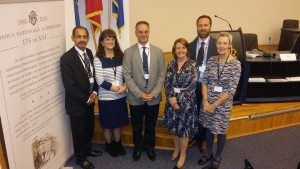 The visit was facilitated by Robert Bailey (Project Director, ROPSF) and Robert Lane (retired adult colo-rectal surgeon, Winchester). We extend our grateful thanks to the two Bob’s for their tireless efforts in organising the visit, and to the ROPSF for financial support. The Romanian Ostomy Patients Support Foundation were formed following a request by Sir Miles Irving FRCS when he asked if the Ileostomy Association could support Romanians who had undergone bowel and urinary surgery following cancer of the bowel and other associated illnesses. Their focus has been on setting up patient support groups, ensuring patients have bags and devices, training nurses in stoma care and supporting surgeons and doctors through conferences and similar events.

On the first morning, there was a masterclass with contributions from all faculty members on aspects of intestinal and urinary stomas in children, including surgery, nursing management and skin care/tissue viability. During the main conference, sessions were co-chaired (sometimes entirely in Romanian!), and we offered lectures on surgery for paediatric inflammatory bowel disease, management of pre-natally diagnosed hydronephrosis and neuropathic bladder. As at BAPS, familiar topics generated debate, such as how to provide emergency treatment of infants with acute, massive GI bleeding. It was noticeable how the full range of complex and minimally-invasive procedures, for example, are possible, despite considerable resource constraints.

We all found our Romanian hosts to be extremely welcoming, generous and expert sommeliers! We hope we have been able to share knowledge and build links and friendships. We would particularly like to thank paediatric surgeons Radu Spataru and Marcel Onacea for their kind hospitality.