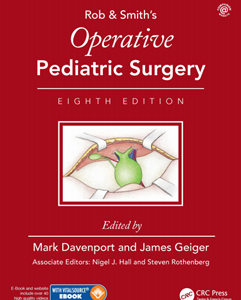 The 8th edition of the venerable Rob & Smith Operative Pediatric Surgery series is now flying off the shelves from bookshops all over the world!  As you may recall, its predecessors, the 6th and 7th editions were the work of a transatlantic special relationship between Lewis Spitz and Arnie Coran with a roughly even split between North America and the Rest of World authors.  It was also encased in a solid black hardback cover, containing resolutely black and white hand drawings and pretty hefty, as of course it should be, given its iconic stature.

Well, there is a new tome in town, and it certainly looks different. There is continuation of the editorial lineage via London and Michigan. It is strikingly colourful with, as before, an accent on illustrated operative steps but with the addition of photographs of pathology and radiographs to give it a little perspective and context.  It is though, noticeably smaller, but perhaps still not quite ready for the pocket yet.

As before, the range of operations and topics is huge with 92 chapters from Vascular  Access to Surgery of Conjoined Twins encompassing over 900 pages.  That is actually a shade less than before as we tried to expunge some of the chapters on operations no longer within the domain of the average western paediatric surgeon. However, we recognise that not all of us are so favoured and we surgeons may have to be adaptable to different environments. So some subjects did beat the cut such as a superbly illustrated and detailed chapter on Burns and Burn Surgery by the team from The Red Cross Hospital in Cape Town. We have also retained the entire sub-specialty and range of urological operations, recognising the significant cross-fertilisation over here, though there may be very little evidence of it across the pond.

The authors are in the main, the usual suspects, but who wouldn’t want their descriptions of cloacal surgery by gurus such as Alberto Pena and his missus; Steve Rothenberg on thoracoscopic oesophageal surgery; Andrew Davidoff on neuroblastoma; and Antonino Morabito and Tom Jaksic on short bowel surgery (take your choice – STEP or longitudinal intestinal lengthening) just to give a few choice examples.  We have tried to match actual practice with places where it actually happens – so Jerome Loveland from Johannesburg writes on chest trauma, New York surgeon Steve Stylianos on abdominal trauma etc.

This edition now comes with a range of operation videos. Some are professional products of their parent departmental budgets while others are a little more, how shall I put it……bespoke. But, at least it’s a start and invariably future editions will all have embedded video illustrations within the text.  There is scope for continual updating of this facility with a web-site promised later this year and the faculty encouraged to contribute as and when videos are produced.

So how much will this set you back. Well on Amazon the hardcopy is advertised for £ 143, and a little more for the e-version.   The publisher’s, CRC Press,  are also offering a 20% discount on list price if bought through their website via this flyer:

Comments, as usual, are welcome