Read this practical and insightful guide to taking better pictures of your dog, brought to you by our outgoing Honorary Treasurer, Alex Lee 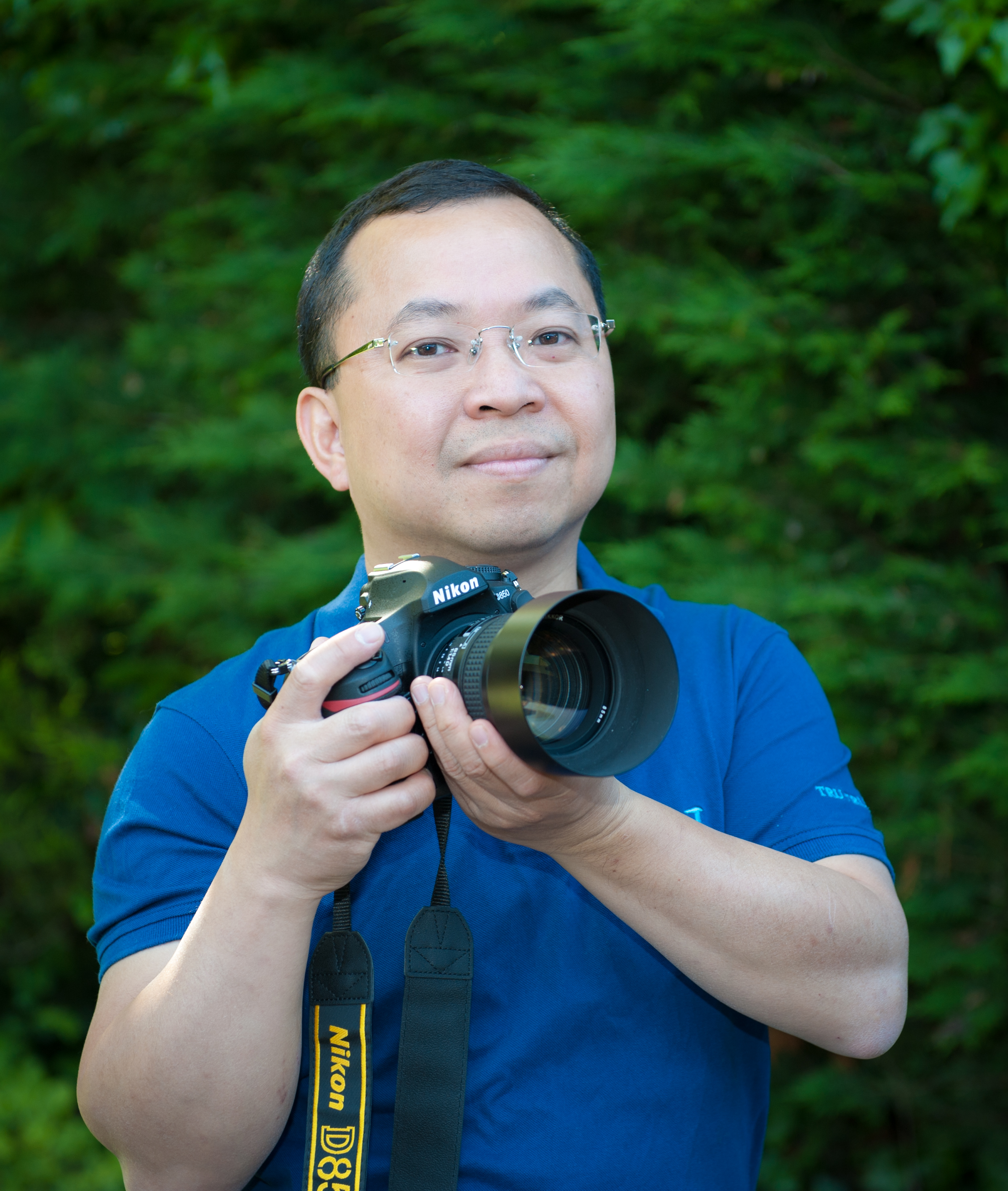 As we celebrate the Year of Dog in the Chinese calendar, many are eager to take photographs of their favourite pet.  In this article I hope to share with you some of my experience and techniques in photography, with particular emphasis in dog photography.  The knowledge, intuition and skills I developed in photography are in many ways useful in my surgical practice.  I hope you will also find there are many parallels between photography and surgery.

Learning through failure is essential for success

My interest in photography started when I acquired a 35mm film SLR in my early teens.  Soon afterwards, I started to print black & white photographs with the images I captured. The skills of printing and editing photographs were as important as the shoot itself. It was always exciting to see the final image as it appeared on paper under the red safelight in the darkroom. 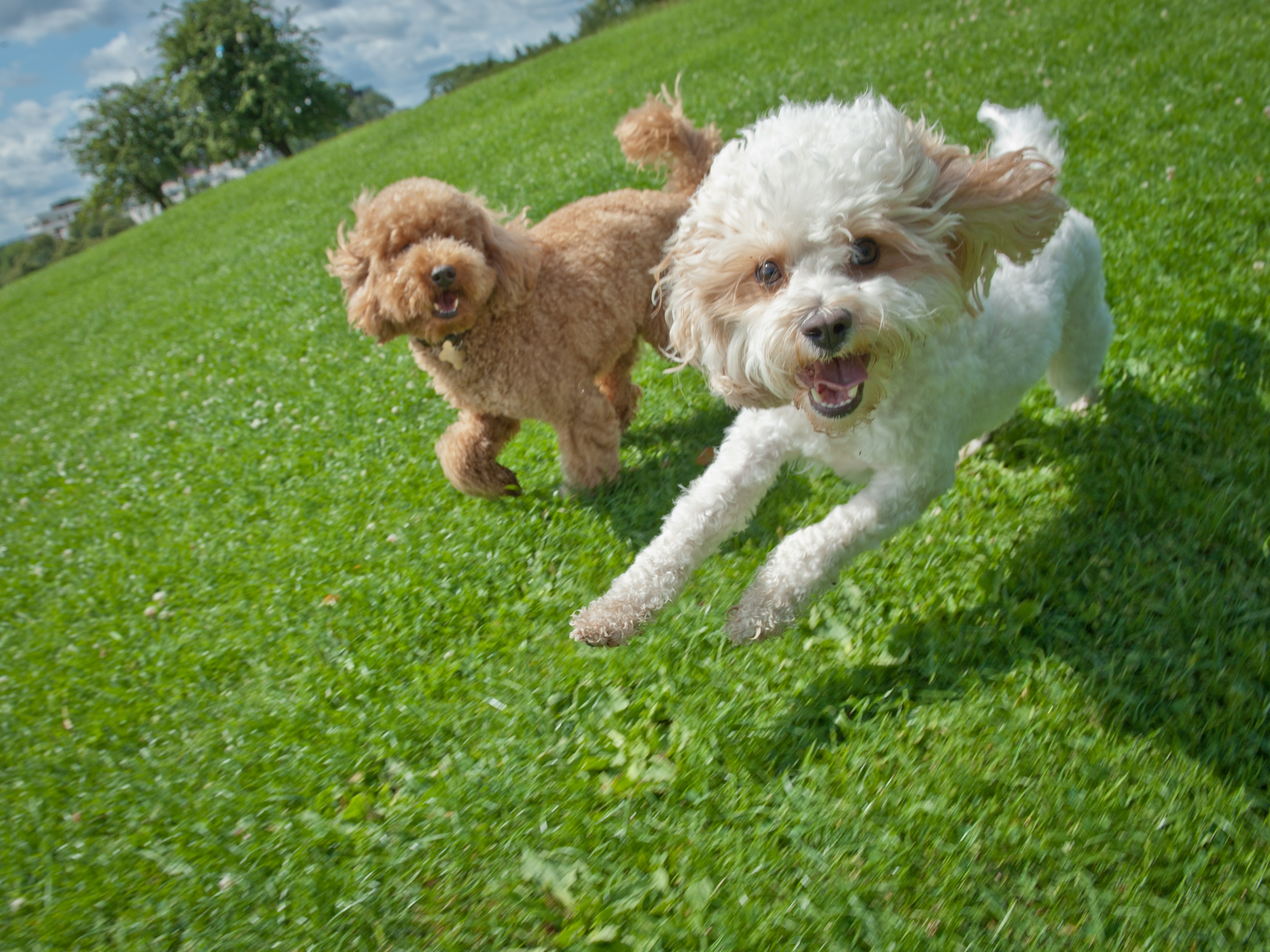 By my late teens, I also learnt to do colour printing in the darkroom. This was a completely different experience. There was no longer a safelight as the colour photographic paper was also sensitive to the iconic red light. I, therefore, had to move around in complete darkness. The ergonomic layout in the darkroom was essential to ensure smooth workflow. In addition to framing, brightness and contrast adjustments which are also important in black & white photography, colour calibration was a challenging but essential step in the colour printing process. Controlling the temperature of the chemicals used in printing was crucial in getting the desired effect. This required hours of trial and error, in total darkness, often ending with unsuccessful prints.  Through repeated failures I learnt to modify the variables until I achieved the results I wanted.  The satisfaction of seeing a successful print upon switching on the light was indescribable.

There are many factors which contribute to a successful photograph but I will concentrate on 3 fundamental elements of a good image – light, composition and moment.

Let there be light 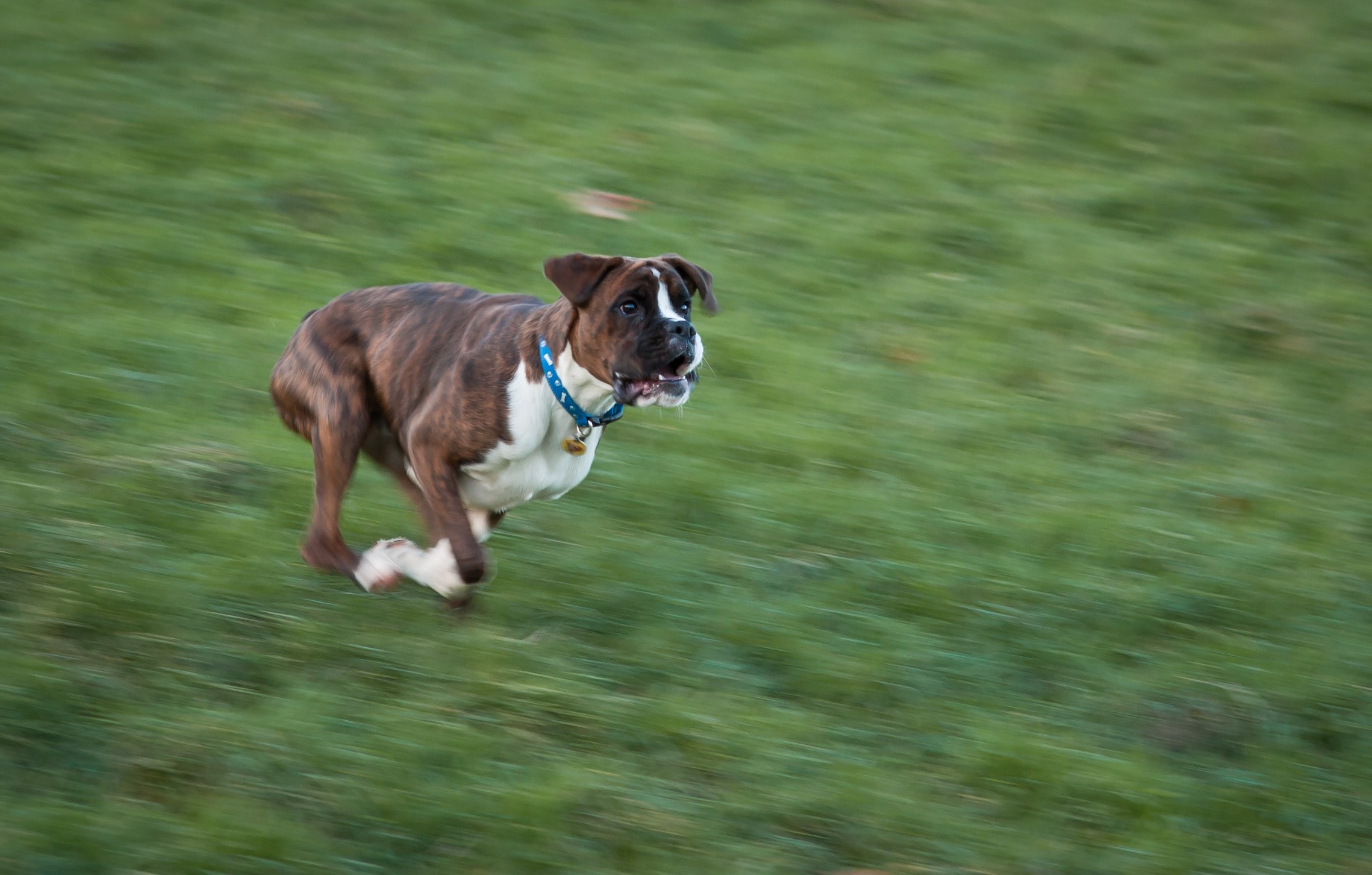 Understanding where the light comes from and optimising the controllable variables are essential in photography.  The human eye is a perfect light-meter and the human brain can adapt to extreme lighting conditions.   The adaptability of the light-meter in a camera is much more limited. It is usually based on the whole frame of the viewfinder even though some cameras have adjustable metering to include only part of the frame, e.g. spot metering.

The quality, quantity and direction of light are important factors to consider when taking an image.  The source of the light, natural or artificial, is not always under your control, e.g. room lights.  Natural indirect light is the best light source especially just after sunrise or before sunset. Midday sunlight is often too harsh and may produce high-contrast shadows which can be problematic.  Infrequently, I use a flashlight with a diffuser in dog photography, pointing away from the dog, i.e. as a bounce off light to supplement a natural light source. Generally, flashlight should be avoided.

Given a fixed amount of light, the brightness of the image is related to three controllable factors – shutter speed, aperture and ISO setting, which can be set as automatic depending on the desired effects and the skill of the photographer.

The shutter speed is the duration when the camera shutter is opened for the sensor to capture the image. A long shutter speed will allow more light to go through but the downside is movement artefact due to the shake of the camera or movement by the subject. However, the artefact can be used to create a sense of movement. To minimise camera shake, a rule of thumb is to use a shutter speed faster than 1/focal length of the lens, e.g. if the focal length is 200mm then use a speed 1/200 second or faster.

The ISO setting is equally important but is often overlooked. It was known as the ASA in film photography which is fixed according the film roll used. In digital photography it can be changed when each image is captured. At high ISO levels, the noise will be greater but it enables the image to be captured when the light level is low.  The quality of the sensor is the main reason for the significant cost difference between standard and high end DSLR equipment.

A telephoto lens with a larger aperture allows a faster shutter speed to be used to minimise movement artefact, i.e. a “fast” lens.  However, this type of lens is constructed with a lot of glass to maximise light passing through and is usually heavy and expensive.

I usually set the aperture and shutter speed manually, i.e. change according to the specific need of the shoot, but set the ISO to automatic whilst keeping a close eye on the metering in the viewfinder in order to limit the ISO to under 4000. The noise effect, even with a higher ISO level, is usually not evident unless the image is viewed on a large display.

Dogs that are black or white are challenging subjects as light-metering can be difficult due to the high contrast. The images commonly end up as a black blob with no details or under exposed, in the case of white dogs.  Using diffused light and lowering the contrast by choosing a similar background may help.

Most cameras also have an exposure compensation (+/-EV) function which allows the brightness to be changed as the camera may not meter correctly on the important area to be highlighted. This is particularly useful with black or white dogs and with a snowy background.

Window to the soul 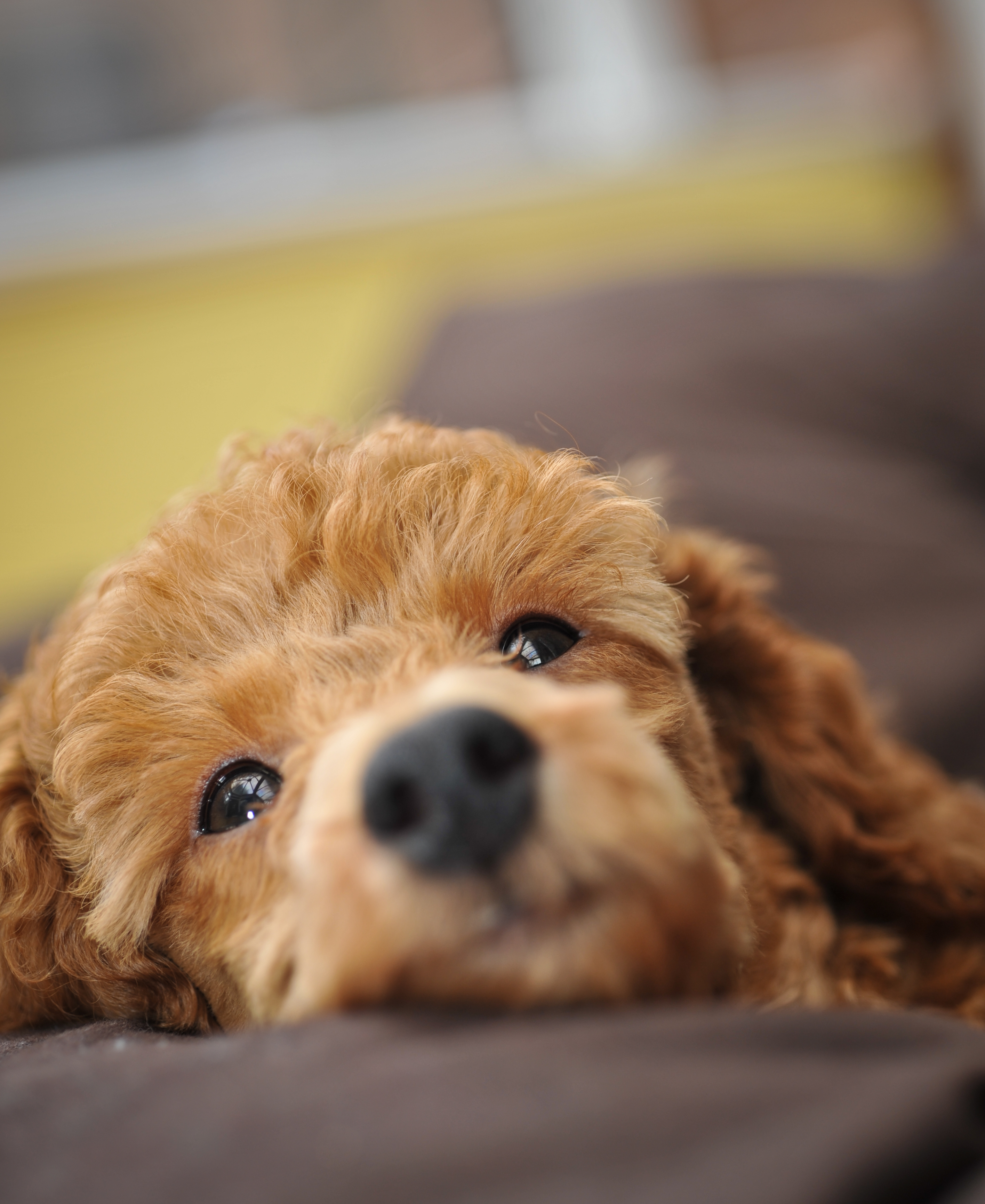 Composition is about arranging the different objects within the frame of the viewfinder in such a way to tell a story. In dog photography, the centre of the story is the dog, and the reflection of the eyes, determined by the direction of light, often gives “life” to the image.  I always aim to focus on the eyes which can be challenging in a moving subject. Try to position yourself such that there is enough light to be reflected from both eyes. Usually this means you need to have the light source behind you while avoiding your casting shadow within the frame. 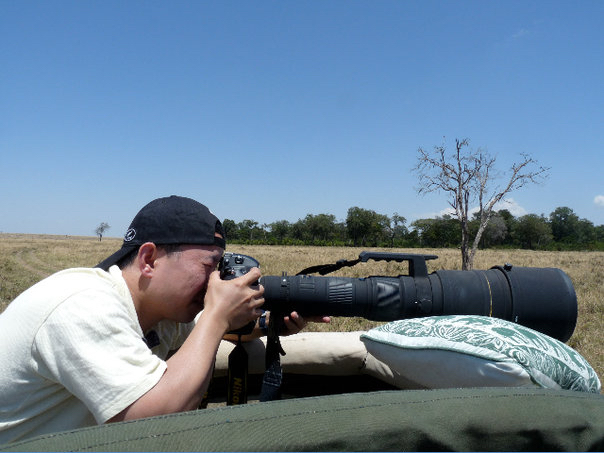 Changing the perspective of view can often transform the composition dramatically. The standing position is usually too high when photographing dogs. It is best to have the camera at the level of the dog’s eyes which usually means shooting near or at ground level.

Beware of clutter in the background which can distract the viewer. Likewise avoid background horizontal lines crossing the dog’s neck.  Other general photography principles may also help such as the use of leading lines and “the rule of thirds”, though these are not to be rigidly adhered to. 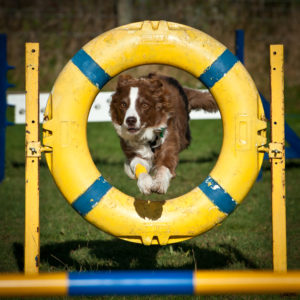 The capture of a unique and meaningful moment with good lighting and in a well composed frame is what every photographer aspire to do.  A good image should represent the personality of the dog as well as the essence of the event.

The ability to adjust the settings quickly and efficiently is essential capturing that unique moment. The photographer’s intuition in composition and framing with the optimal perspective are also important.

Having a good rapport with the dog and its owner is important as you need to have the dog’s attention throughout the shoot. Have a squeaky toy and some treats ready to catch the dog’s attention. It may be easier to direct the dog to look towards you and to run towards you if your assistant or the owner is standing behind you.  Of course it is possible to photograph dogs without an assistant as I frequently do.

It is also useful to know the personality of dog in order to capture its character.  When the dog is relaxed, it is more upbeat and you may even get a smiling face!

Everyone can be a photographer these days.  The camera most people use is a smartphone, a point ‘n’ shoot, or a standard DSLR.  Using a professional DSLR or a top of the range Hasselblad does not make you a good photographer (even though the photographs may be ultra-sharp with lots of mega-pixels!). 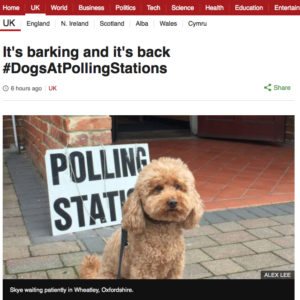 Some of my most memorable shots were taken with less sophisticated but readily available equipment, including the image of my dog which was taken outside a polling station with my smartphone. This image was used on the front page of BBC News website throughout the polling day in the 2016 referendum!

I cannot emphasise enough the importance of knowing the capability and functions of the camera, especially what variables you can control.  My camera can take multiple full frames of up to 11fps and is particularly useful for photographing dogs in action.  While it is not just “spraying and praying” for a good shot, the ability to take several frames with other variables optimally set does maximise the chance of a good shot.

I use Adobe Lightroom for simple digital post-processing work, such as cropping and adjusting highlights and contrast.  It resembles darkroom processing but there are a lot more image manipulation possible.  More complex image editing using Photoshop can be very time-consuming and requires a different set of skills.  I always aim to minimise the need for post-processing by ensuring the image is taken as optimally as possible. 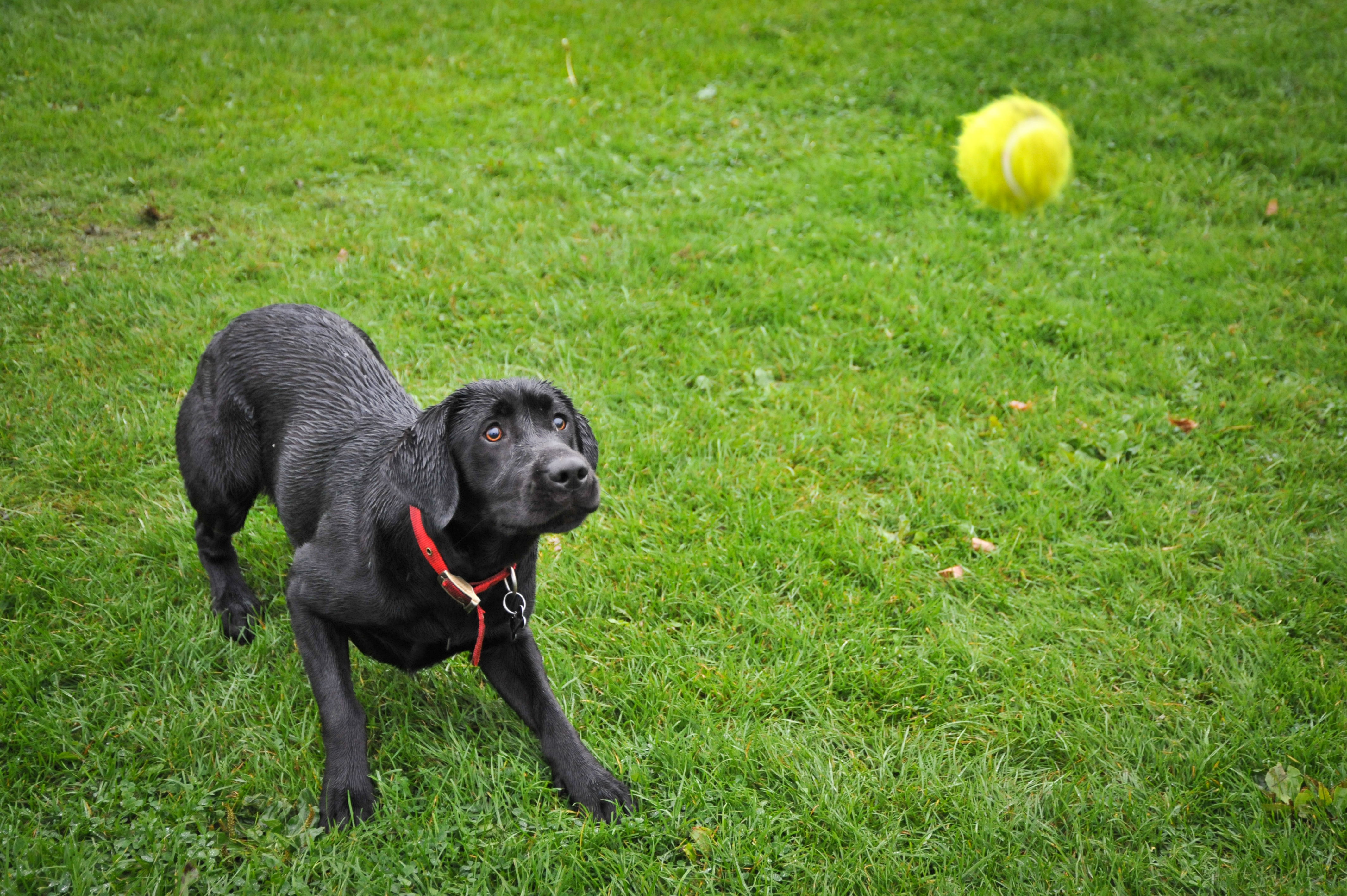 Capturing the right moment gives me the utmost satisfaction regardless of the sophistication of equipment and software used.  I hope this article has encouraged you to get your camera out and try out some of the photographic techniques on your canine friends.

“To me, photography is the simultaneous recognition, in a fraction of a second, of the significance of an event as well as of a precise organization of forms which give that event its proper expression.” ~ Henri Cartier-Bresson