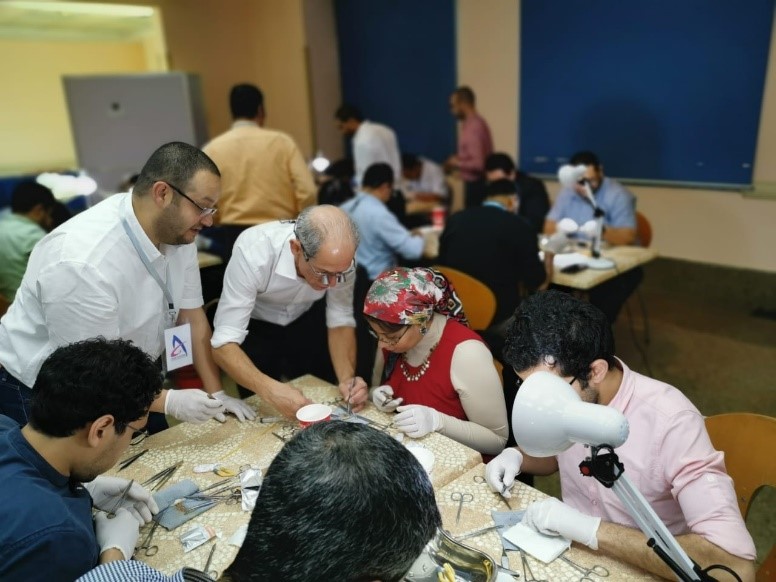 Messrs Lander, Kenny and Shalaby ran the Neonatal Operative Skills Workshop at Ain Shams University, Cairo with the support of Professor Ayman Al Baghdady, Ahmed Abd El Hassib and Hani Embaby as local faculty. Due to operational pressures at Ain Shams, we were only able to commence model preparation at 1500hrs on the 11th November but the models of duodenal and oesophageal atresia were prepared with the help of several surgical registrars. The course was oversubscribed, and 44 delegates from all over Egypt attended. Models were constructed from chicken and lamb intestine. For the minority of us interested in comparative anatomy, SKs assessment that lambs must be prone to volvulus was confirmed on Pubmed (Gumbrell RC., Red gut in sheep: a disease with a twist. N Z Vet J. 1997 Dec;45(6):217-21.).

Feedback was overwhelmingly positive, and the President of the Egyptian Paediatric Surgical Association, Professor Ahmed Zaki, is very keen for further workshops to be run soon. Although central Egyptian paediatric surgical units are excellent, many units are small with long transfer times precluding transfers to larger centres. It was clear that surgeons in these peripheral units appreciated the simulated environment to understand and discuss operative approaches.

The following two days was the annual meeting and we learnt that index caseload is high but mortality for babies with gastroschisis and oesophageal atresia was over 50% due to late presentation, poor stabilisation and lack of parenteral nutrition. Minimal access surgery is well advanced in large university centres. We all co-chaired sessions and gave invited lectures which were well received. A particularly interesting debate was around differing attitudes and practices around DSD between Europe and Egypt. EPSA are keen to maintain input from UK-based surgeons into their meetings as this had been the norm until comparatively recently.

Tony, Simon and Mohamed would like to thank the Egyptian Paediatric Surgical Association for their kind hospitality.