Focus on Paediatric Surgery – the literature

You may not have noticed, but our speciality has become the flavour of the month within the general medical literature.  Articles have appeared in the high-impact, and hugely respected journals: the Lancet, the British Medical Journal and the British Journal of Surgery.  So let’s have look at them. 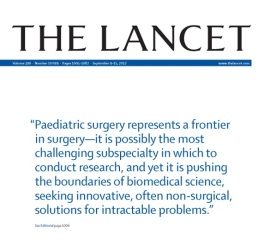 First off is The Lancet – the oldest, continuously published medical journal since 1823 with a stratospheric impact factor of 45.  There were two subject reviews on general paediatric surgery and paediatric urology together with a commentary and an editorial.

The Lancet: Long-term implications and global impact of paediatric surgery 2017

Recent developments in paediatric gastrointestinal surgery have focused on minimally invasive surgery, the accumulation of high-quality clinical evidence, and scientific research. The benefits of minimally invasive surgery for common disorders like appendicitis and hypertrophic pyloric stenosis are all supported by good clinical evidence. Although minimally invasive surgery has been extended to neonatal surgery, it is difficult to establish its role for neonatal disorders such as oesophageal atresia and biliary atresia through clinical trials because of the rarity of these disorders. Advances in treatments for biliary atresia and necrotising enterocolitis have been achieved through specialisation, multidisciplinary management, and multicentre collaboration in research; similarly robust clinical evidence for other rare gastrointestinal disorders is needed. As more neonates with gastrointestinal diseases survive into adulthood, their long-term sequelae will also need evidence-based multidisciplinary care. Identifying cures for long-term problems of a complex developmental anomaly such as Hirschsprung’s disease will rely on unravelling its pathogenesis through genetics and the development of stem-cell therapy.

The Lancet: Advances in paediatric gastroenterology 2017

Paediatric urological surgery is often required for managing congenital and acquired disorders of the genitourinary system. In this Series paper, we highlight advances in the surgical management of six paediatric urological disorders. The management of vesicoureteral reflux is evolving, with advocacy ranging from a less interventional assessment and antimicrobial prophylaxis to surgery including endoscopic injection of a bulking agent and minimally invasive ureteric reimplantation. Evidence supports early orchidopexy to improve fertility and reduce malignancy in boys with undescended testes. A variety of surgical techniques have been developed for hypospadias, with excellent outcomes for distal but not proximal hypospadias. Pelvi-ureteric junction obstruction is mostly detected prenatally; indications for surgery have been refined with evidence, and minimally invasive pyeloplasty is now standard. The outlook for patients with neurogenic bladder has been transformed by a combination of clean intermittent catheterisation, algorithms of diagnostic investigations, and innovative medical and surgical therapies. Posterior urethral valves are associated with considerable mortality; fetal diagnosis allows stratification of candidates for intervention, but ongoing bladder dysfunction in patients after valve ablation remains a cause of long-term morbidity

The Lancet: Advances in paediatric urology 2017

Pushing the boundaries in paediatric surgery 2017

The Lancet: Pushing the boundaries in paediatric surgery 2017

Next up was the British Journal of Surgery. Published since 1913, and having the highest impact factor of any European surgical journals at around 6.  Paul Losty from Liverpool contributed a leading article highlighting an increasingly problematic area – that of surgical research in children.  The same issue also saw four papers loosely bound within the paediatric surgical theme. One an obvious gem – a randomised controlled trial from Great Ormond Street Hospital, London led by Joe Curry on the best way to achieve a gastrostomy in children.  The others were on ileo-rectal anastomoses in children and adults from the Netherlands; a randomised feasibility trial from the wonderfully named NINJA pilot collaborative on whether to leave the repair or restore the nail bed or not following finger-tip injuries; and another randomised trial on whether a virtual-reality tour of the operating theatre environment reduce fear and anxiety in Korean children – it did.

Read “The challenges of surgical research in surgery”

Lastly the good old British Medical Journal – probably the one most easily discarded into the recycling bin every weekend in the households of BMA members; having become a political mouth-piece for its parent organisation and the home of woolly liberals everywhere (or is this just my opinion?)

Finally, a team of general surgeons from the West Country and Wales, have produced a well-researched review article in the Clinical Update section of the BMJ on management of paediatric (abdominal wall) hernias. They discuss umbilical, inguinal, epigastric hernias and although everyone has an opinion their recommendations all seem pretty reasonable.  They also recommend our own series of patient information sheets suitable for use in any environment in the UK.

Enjoy your Autumnal reading, preferably in an armchair warmed by a smouldering log-fire and a glass or two of 18-year old Glenmorangie.