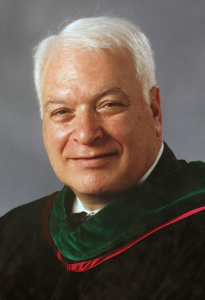 Jay Grosfeld, friend of the BAPS, passed away last week (18th October 2016) amid his family and will be mourned around the world by anyone whose calling lies with the surgery of infants and children.

Jay was a Brooklyn, New York man, born in 1935 into a non-medical family who grew up in the halcyon days of post-war America in the 1940s and 50s. As he says, school didn’t pay too much attention to him as his main interests lay in (American) football and more particularly on the basketball court. This allowed him into George Washington university on a sports scholarship and then back to college in New York to major in history and biology. He entered the University of New York Medical School and graduated from there.

The Vietnam War caught up with Jay as it did with many of his generation and meant a two-year spell in the US Army Medical Corps following general surgical residency training. Though spared overseas service he spent time in army bases in Texas and South Carolina as the surgeon-in-residence and apparently basketball coach.

By 1968 he had arrived in a paediatric surgical residency in Columbus, Ohio under the tutelage of Dr Bill Clatworthy which was clearly becoming a nursery for the next generation of American surgeons such as Biemann Othersen, James (Jim) O’Neil, Alfred (Al) Lorimier, Marc Rowe, and Erik (Rick) Fonkalsrud.

For most of us though Jay will always be synonymous with the Riley Children’s Hospital in Indianapolis, IN. He moved there, now married and with 5 children, in 1972 as a pioneer paediatric surgeon determined to bring modern surgical practice to the mid-west. Of course, in this he was entirely successful and developed as Chief not only a huge ECMO programme but latterly a liver and small bowel transplant programme set up with the English transplant surgeon Peter Friend.

Jay was always a keen proponent of surgical research with his own projects being both clinically and laboratory based in very diverse areas of short bowel syndrome, biliary atresia, Wilms’ tumours and neuroblastoma. Raiding the PubMed search engine I know he has contributed to over 430 publications, many, many chapters and of course is widely famous for editing the big blue (5th edition) then red (6th edition) two-volume textbook of Pediatric Surgery (Mosby Inc.) with Jim O’Neil and other stalwarts of his generation.

He had a more than 40-year relationship with BAPS, starting actually with his first official conference presentation on rhabdomyosarcoma as it happens (jointly authored with Bill Clatworthy) at a congress held in Dublin in 1968. Over the years he attended both our UK and overseas meetings regularly and latterly participated in our council meetings as an overseas member. Never a quiet, contemplative presence in the conference hall he would be quick to rise and point out an obvious flaw in the presentation or proceedings or alternatively to praise and encourage as required. Similarly, he would invariably be the first there in the morning publication committee meeting ensuring the proceedings motored to a swift but fair conclusion. He never interfered with the debate but was always on hand to provide guidance from his vast clinical repository of knowledge.

He has received much formal recognition from societies and institutions. He has been honoured by BAPS with a Denis Browne Medal in 1998, our highest accolade, and has honorary membership of the four constituent surgical colleges of the British Isles. Across the Atlantic he was a prophet honoured in his own land with the William Ladd Medal in 2002 given by the surgical section of the American

Academy of Pediatrics and became the first “pediatric” President of the American Surgical Association, the oldest such society in the USA.

He has become the longest serving editor of the “Journal of Pediatric Surgery” beginning in 1994, following the first, Dr CE Koop (later Surgeon General to the USA) and then Stephan Gans. He developed close personal and working relationships with the UK editors Vic Boston and Dan Young during that time. During this period of a rapidly-changing medical publishing environment he oversaw establishment and integration of the Journal within the internet giving it an electronic platform and presence commensurate with its size and importance to our community. He was instrumental in identifying the educational needs of junior surgeons and residents and established the “Seminars in Pediatric Surgery” in 1992 as a review-based publication with authors from around the world. This and its wide range of topics led to its success as the leading sector journal with the highest impact factor.

Much of his drive and inspiration emanated from his marriage of course. Margie was a flight attendant with TWA originally but it was as a nurse who true to form met her future husband on the wards of the Bellevue Hospital in New York. It could have been the plot line of the TV series “Dr Kildare” popular in the same era.

I really only knew Jay and Margie in his “retirement” years, being far too timid to engage him in anything but polite conversation and I never found my way to his Florida wintering home in Sanibel. But the editors’ dinners in Graz, Aberdeen, Bournemouth, Edinburgh and lastly in Cardiff brought out his gregarious, open-hearted side offering views on all elements of world affairs and topics. I also sensed his despair with some elements of the changing nature of surgical service and commitment and the shrinking of the surgeon’s working week. His own work-life balance obvious in a long-lasting marriage, 5 children and 17 grand-children, all achieved despite a 100+ hour working week. A big man around the basketball court and undoubtedly a colossus in the world of paediatric surgery – but I never did find out what the “L” stood for.

Professor Grosfeld’s memorial service was  held at the Indianapolis Museum of Art in Indianapolis, Indiana on Saturday, November 19th, 2016.  Professor Lewis Spitz represented BAPS at this service and delivered a short address.  A full obituary will appear in the December issue of the JPS.

[Many biographical details abridged from an interview by Michael Klein published in 2006 for the American Academy of Pediatrics].