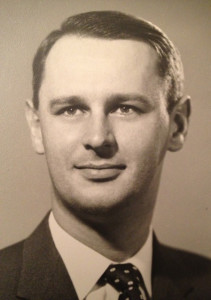 John Beck was born into a family of medical men who all qualified in Edinburgh. His grandfather Louis, a popular GP in Cape Town, died from Spanish flu in 1919 while seeing to his patients. Louis’s brother, Sir Meiring Beck was both a doctor and Cabinet Minister. John’s father, practised in Johannesburg where John was born. He studied at the University of Witwatersrand qualifying at 22 years old as MB BCh 1955. John was a House Doctor at Johannesburg General where he received his surgical training from a woman, Dr Phyllis Knocker. After other house jobs and a spell in a Mission Hospital, John was offered a job in 1957 as Medical Officer and Assistant Bus Driver on a trans Africa trip from Johannesburg through the Congo, Nigeria, Chad, Algeria etc. The first time he had been outside South Africa!

Deciding to concentrate on surgery, John followed the family tradition and went to Edinburgh to take his Primary – which he passed at the first attempt. Returning to London he promptly proposed to Paddy and they married a few weeks later. Meanwhile Professor Ian Aird, a friend of his father when students together in Edinburgh, offered him a post at Hammersmith Hospital. A year later, John worked for 2 years as a surgical registrar in Rochford/Southend where their first child, Lucy, was born. Finding it difficult to find the right post in Britain, they returned to South Africa in early 1964 where Professor Jannie Louw offered him a training post in Cape Town. This changed the course of John’s surgical career. Working for Chris Barnard, Jannie Louw and Sid Cywes at the Red Cross Childrens Hospital convinced him to pursue a career in paediatric surgery. In late 1966 he was invited to develop paediatric surgery in the Transvaal with Michael Dinner. Because of apartheid, this meant working at 3 different hospitals, Transvaal Childrens Hospital (white children), Coronation Hospital (coloured or mixed race) and Baragwanath (blacks). A later colleague was Lewis Spitz who became Professor of Paediatric Surgery at Great Ormond Street and a world renowned paediatric surgeon. John also inspired David Lloyd, later Professor of Paediatric Surgery in Liverpool, to take up the speciality.

Increasingly appalled by the injustices of apartheid, John and Paddy wanted to leave South Africa. In early 1972 a chance encounter in Baragwanath Hospital with Professor John Goligher from Leeds led to a move to Leeds as the first Paediatric surgeon in the Yorkshire Region (including Leeds and Bradford). For the first 10 years John and his anaesthetist Lawrie Gardner worked single handed with only the support of dedicated nurses to establish paediatric and neonatal surgery as a speciality in the Region. Initial suspicion by the local medical community who were used to referring babies to general surgeons turned to respect when the survival of babies following surgery increased substantially. The success of the unit lead to the appointment of David Thomas in 1982. The department grew over the following decade with the appointment of Richard Spicer and career trainees. There are now 12 consultants in Paediatric Surgery and Urology. In 1990 John was found to have lymphoma but with characteristic resilience, he resumed full time clinical practice following chemotherapy.

John retired from the NHS in 1995 and the Becks returned to South Africa to work part time to pay something back to the country from which they, as white people, had gained so much. John worked part time in Themba Hospital, Mpumalanga for a year but had to move to the Cape as he had a bad reaction to anti malaria medication. While working at Themba, John met Somwe Wa Somwe, a Congolese doctor trained by Belgian missionaries in Mobutu’s Congo, who wanted to be a paediatrician, but there were no teaching hospitals in the area. John recognised how good a doctor Somwe was so he paid his air fare from South Africa to Britain and pulled strings among the paediatric community to find a clinical attachment for him. Somwe proved his worth by eventually getting a post at Birmingham Children’s Hospital following his obtaining an MRCPCH, but he too wanted to put something back into Africa so he returned to Zambia – his wife’s home country.

In Cape Town, John continued to work part time in the non white areas of Cape Town (Khayelitsha and Mitchells Plain) until a further bout of lymphoma forced him to retire from medicine fully and return to UK.

After treatment for a third bout of lymphoma John and Paddy moved down to Winchester where they enjoyed a peaceful retirement close to their family. Unfortunately the lymphoma returned again in 2015 together with a mix of other cancers and John made the courageous decision not to have further chemotherapy. John is survived by his lovely wife Paddy and their three children, Lucy, James and Janet.

John was a dedicated and humble man who conducted an exhausting clinical practice with equanimity and good humour. He was rarely moved to anger but left no doubt who was in charge. He upheld very high standards and was loved by his patients, their parents and the nursing and medical staff because of this. John eschewed honours and found little time to write but if the measure of surgical excellence is the esteem of peers and colleagues it is difficult to think of anyone who was in his league.