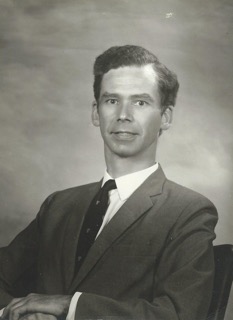 Richard Cook, who has died on at the age of 87, was a highly regarded paediatric surgeon at Alder Hey Children’s Hospital in Liverpool.

After pre-clinical studies at Merton College, Oxford, where he gained honours in Physiology, Richard went to St Bartholomew’s Hospital, London for his clinical training, graduating BM, B.Ch in 1958. It was there that he met Bart’s nurse Ann Watford, who he married in 1960.

Richard had joined the Colonial Medical Service and two months after their wedding flew with Ann to Kenya where John, their first child, was born. Work at rural hospitals was beyond anything Richard had experienced but he rose to the challenge, doing procedures he had never previously done and trying to learn the local language. He took every opportunity to explore the country with Ann and John, with some harrowing experiences on challenging roads. In 1963 the family returned to London, where Nicholas was born, and after various jobs Richard moved to Sheffield in 1965 as a registrar at a time when the management of myelomeningocoele was being hotly debated. Rachel was born in 1967 and later that year Richard was appointed to a Senior Registrar post at Alder Hey. In 1969 the family decamped to the USA where Richard spent a year at the Children’s Hospital in Seattle. In 1971 he was offered a consultant post at Alder Hey; Richard and Ann’s initial doubts about settling permanently in Liverpool were short-lived and he held this post until his retirement in 1995. He was joined in 1972 by Roger Cudmore, who had also trained in Sheffield and became a close friend.

This was a time when Alder Hey was at the forefront of innovations in the surgical care of newborn infants, lead by Peter Paul Rickham and Isabella Forshall, that had an immediate positive impact on the survival of these vulnerable infants. The Neonatal Surgical Unit, opened in 1953 to provide comprehensive care for newborn infants requiring an operation, continued to attract world-wide interest. Richard and Roger were part of these developments and following the retirement of the original pioneers ensured the future of the NSU and indeed paediatric surgery at Alder Hey. Other surgeons, notably Irene Irving (m.Desmuth) played their part but these two men kept Alder Hey at the forefront of paediatric surgery in the United Kingdom for well over twenty years.

Richard was a perfect gentleman, liked and respected by staff at all levels. He was an exceptionally gifted meticulous surgeon and one of the last of the true “generalists”, a surgeon who could do everything from neurosurgery to urology (including hypospadias surgery) and make it all look effortless. Universally regarded as one of the finest technical surgeons of his generation he was one of the first surgeons in the United Kingdom to use Pena’s approach for ano-rectal anomalies.

A devout Christian, Richard was an active member of the Christian Medical Fellowship. The large house which he and Ann bought in South Liverpool was deliberately chosen to accommodate CMF meetings and other Christian activities involving people from all walks of life and a range of countries. The basement was converted into a flat for Richard’s mother and later Ann’s mother, both of whom needed care. In 1973 Katherine was adopted aged three and a half. Richard worked hard to cultivate the large garden that contributed to their needs and the family were encouraged to participate. In spite of these commitments Richard found time to help others, as was the case when he voluntarily found a house for us to rent when Carol and I moved from Pittsburgh to Liverpool with our four children; this meant a great deal to us.

In 1977 Richard accepted an invitation from Neil Freeman to join him in Kuwait where he was establishing paediatric surgery. He stayed for 15 months; the family remained at home but were able to visit him. Determined to visit Iraq, Richard rented a car and against advice took his sons Nick and John into Iraq where they braved military check points (sometimes manned by heavily armed teenagers), very basic accommodation and other challenges to visit historic sites including Ur, Babylon and Samara. Even Richard admitted to relief when they returned safely to Kuwait.

In 2007 Anne was diagnosed with rectal carcinoma and underwent a major resection followed by chemotherapy and radiotherapy. The results were encouraging and she regained some of her energy. It came as a shock therefore when a routine CT scan in January 2009 showed multiple abdominal metastases. Ann declined further treatment and was able to go on a previously planned trip to Andalucía, but eventually died at home in October 2009.

Richard subsequently moved to Cheltenham to be near Rachel and her family. As ever, visitors were welcomed to his home and he was active in his local church. In the Autumn of 2020 he quite suddenly had increasing difficulty standing and walking. The cause of this was not clear but, realising that this was the beginning of the end of his earthly life, he declined investigations and moved in with Rachel and Giles. He died peacefully on 8th December 2020 with his granddaughter Sophie at his side.