President of the British Association of Paediatric Surgeons 1981-82 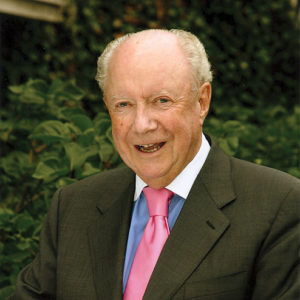 It is a risky business trying to sum up the essence of Barry O’Donnell in a few short words. I tried once before and was unsuccessful. That was when I read the citation for his Honorary Fellowship of the Royal College of Surgeons of England.

One was limited to 350 words and I did my best. After the celebration dinner that evening he, of course, gave one of his amusing and well honed speeches. Near the end he thanked me for my kind words and acknowledged that “Ray went over the top but did he go over the top enough?” Barry did not do false modesty and indeed I have heard him admit that “it is hard to be humble when you really know you’re great”.  He was great in so many ways.

He was born in the Rebel County, indeed, the city of Cork in 1926 (The Free State of the Irish Republic was only four years old) to Michael and Kitty O’Donnell. The eldest of three sons, his formal education included The Christian Brothers, Cork, and later Castleknock College, Dublin. He then returned to Cork and attended University College Cork (UCC) where he graduated in medicine with honours in 1949 and was subsequently awarded a Master’s in Surgery in 1954. He had been advised by his father against a career in journalism or law and was told instead that medicine would be preferable “because you will always get a job as a doctor”!

His postgraduate training posts in the U.K. ended with his appointment as Senior Registrar in the Hospital for Sick Children in Great Ormond St. He was proud to have worked with Sir Denis Brown (father of British Paediatric Surgery) and Sir David Innes Williams. He was awarded the Ainsworth Traveling Scholarship from UCC, which saw him head to the famous Lahey Clinic, Boston and a spell with the renowned Richard Cattell. He also spent time with Orvar Swenson at the Floating Hospital for Children where he learned how to do ‘Swenie’s’ operation for Hirschsprung’s disease properly from the master, an operation which Barry continued to perform until he retired.

His appointment to a Consultant position in 1957 was to the very new Our Lady’s Hospital for Sick Children in Dublin, where he devoted himself for the next 36 years. His was a very young appointment for a surgeon at that time. Clearly he had been very successful and indeed focused. Barry was always self-disciplined and worked hard at anything he undertook. He was the first fully trained full time paediatric surgeon to be appointed in Ireland.

He told me, when I was already married, that it was unwise to do so until you were a consultant so that you can apply yourself to the job in hand. Anyway he was now free to marry, which he did in 1959 to the love of his life Mary Leydon. The marriage got off to a good start. On his honeymoon in Rome Pope John XXIII blessed his hands and then said “I’d better bless his head as well because that’s where the decisions are made’. They were to have a long happy marriage and he was distraught when she predeceased him in 2015. In this he was supported by all four of his children but particularly by his devoted daughter Catherine.

He subsequently had two additional appointments to the National Children’s Hospital (1965-80)  and The Children’s University Hospital (1977-88). One of Barry’s proudest achievement’s was being one of the main instigators of the Children’s Research Centre (founded in 1965) based at Our Lady’s and which became a very well known, successful and productive institution, being funded with great support nationally and indeed internationally. His innovation of endoscopic correction of vesicoureteric reflux in 1984 and which was developed jointly with Prem Puri was a major contribution to Paediatric Urology. This was recognized when they both received a National People of the Year award in 1984.

He was always interested in medical politics and active in The Irish Medical Association (IMA). He became President in 1976 but quite remarkably was also simultaneously elected President of the British and Canadian Medical Associations. This did not happen by accident and is unlikely to happen again. Sometimes his outspoken and important rhetoric could be unpopular.

He was particularly proud of his Professorship of Paediatric Surgery in The Royal College of Surgeons in Ireland, being the first incumbent of the post. He was elected President in 1998 and in this position he oversaw major property expansions of the college and the introduction of the Mini-Med School (lay public). He also conceived the post of Director of Surgical affairs and achieved several administrative reforms.

In his day-to-day practice, while remaining a general paediatric surgeon he concentrated  more and more on the urology of childhood. Having said that, he published a standard text with Harold Nixon; ‘The Essentials of Paediatric Surgery’, which went into several editions and was popular in these islands. He also wrote a magnificent textbook on childhood abdominal pain. It was short, but full of useful information and good practical advice particularly on the issue of Recurrent Abdominal Pain of Childhood, a difficult problem to deal with. I think he was particularly happy to co-edit the 3rd Edition of ‘Pediatric Urology’ following his distinguished predecessors Innes Williams and Johnson. He also published  sixty four peer-reviewed papers.

Many adults now and their families then have good reason to be grateful to BO’D.

During his fruitful professional life, he achieved a very large number of honours, not all mentioned here – see below.  About the two much-vaunted visiting professorships to Harvard, he liked to say himself that the second one was to apologise for what he had said the first time.

In his ‘retirement’ he wrote two further texts, both historical, one on the life of the remarkable Irish surgeon Terence Millin and the other a magnum opus, ‘Irish Surgeons and Surgery in the Twentieth Century’.

Recreations included rugby football and at 5 foot 7 inches, and by his own account stocky, combative and energetic, he was suitably built to be a hooker in the scrum, at least in the rugby of his day. He won his UCC colours 1946-48. Later on he started to sail, initially in Dublin Bay but later also Kinsale, where he and Mary had a lovely holiday home. Indeed this became a family pursuit with all three sons (John, Nicholas and Michael) at one stage representing Ireland at the sport. Barry skippered his yacht ‘Sundowner’ in the infamous Fastnet Race in 1979, a dice with death which lived up to his own definition of sailing as “standing in a cold shower, tearing up fifty pound notes and being sick all over yourself”! In recent years, he enjoyed playing golf.  A regular in Portmarnock, he spent many a happy day playing and having lunch with his friends in the “Departure Lounge”, as he liked to say.

John, his eldest son, said in his father’s eulogy at the thanksgiving mass that “His sense of humour never deserted him: in his last hours, somewhat alarmed to see the whole family in his room, he nonetheless quoted Lord Palmerston: “Dying: that’s the last thing I’d do.”

Barry O’Donnell had a wonderful and fulfilled life and after a brilliant medical career leaves behind the legacy of a fine family of which he can be proud. I know they are proud of him. He also leaves after him a medical profession which has been enriched by his thoughtful contributions, by his research and by his teaching; and throughout all of this, a magnificent wit and sense of humour pervaded it all.

It is said ‘he exceeded his mother’s expectations.’ Not many Cork boys do that.

Multiple eponymous addresses in Australia, US and UK,