ACADEMIC OUTPUT IN THE UK: THE LEAGUE TABLES

One of the founding principles of BAPS is to ‘facilitate research‘ – admittedly a fairly ill-defined concept but it certainly sponsors paediatric surgical research by supporting surgeons-in-training early in their career and organizes the BAPS Annual International Congress which showcases this and other such academic activities sharing them with trainees, consultants and many overseas delegates.  At one such conference, we became interested in the question of how much of the published world literature in paediatic surgery is really emerging from UK centres and as an aside who just might be doing it? To try to answer this question we, together with Wajid Jawaid a senior trainee in the South East Consortium looked at the publication record of all UK & Northern Ireland departments from 2005 – 2020 to get some idea of quantity at least.

Where Does The Literature Come From?

Perhaps not surprisingly, we found that GOSH in London was research ‘top dog‘ with over 400 published papers to its name. Alder Hey Children’s Hospital & University Of Liverpool and Kings College Hospital in South London then came in at #2 and #3 respectively. The rest of the “top ten” places in the League Table was largely drawn from large metropolitan Children’s Hospitals in England, such as Birmingham (#5), Manchester (#6) and Leeds (#7), with Glasgow (#9) being the leading Scottish centre.  There was then a bit of a gap in numbers from #10 to #11 and then we are all the way down to Hull finishing at #26. 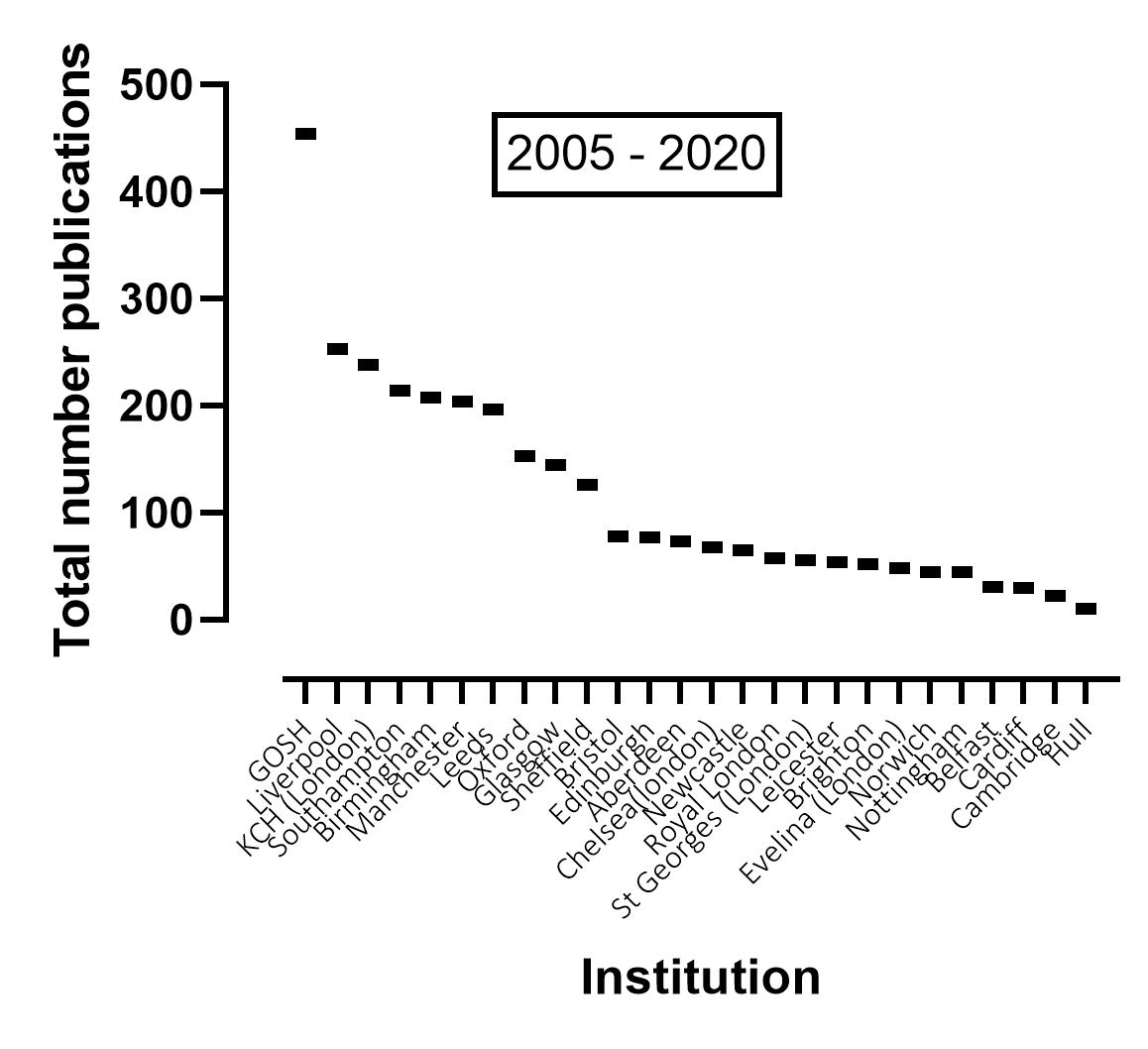 What perhaps was more concerning was that if we divided the output of the ‘Top Ten‘ into two 5-year periods (2005-9 and 2015-19) there was a decrease overall with only 4 surgical units increasing output in that later period.  These findings remember are in the context of a ‘huge increase’ in the worldwide paediatric surgical literature and proliferation of any number of journals to put them in.

Who Are The Academic Superstars?

The survey concentrated on Departmental output in its calculations of outcome activity with only one published item counting no matter how many authors were on the papers or whether it was a case report or a randomized trial. To look at individual performance we looked at the Hirsch or h-index is calculated by Scopus (you can look yours up!) which is a combination of the number of papers and each paper’s citation count. The average for an American paediatric surgeon has been calculated  at an h-index = 12, and it turns out that the average for a UK paediatric surgeon was ……12 also .

Obviously the higher a h-index is the better it is, and Table 2 shows the ‘high-flyers‘ for the ‘Top 10‘  paediatric surgical units during the study period. Those who are currently active are highlighted in bold text and some you may not recognise either because of retirement or their  emigration to pastures new.

What’s The Most Cited UK paper?

Just for interest we also looked at the most influential papers each unit had contributed over the years. Having released your work into the critical maelstrom you may want to see how successful it is and how many other authors bother to read it or at least quote it in their own work. Table 3 illustrates the most cited papers for the Top Ten units. Not surprisingly, most are somewhat timeworn as the citation index is a cumulative thing over time but there are some interesting observations. Systematic reviews & meta-analyses are common in our speciality field though the ‘ top-cited ’ paper from GOSH is actually a case report, albeit one with a re-engineered tracheal implant! The most cited paper by the way was a review from Kings College Hospital and Birmingham Children’s on biliary atresia published in the Lancet.

So what did we conclude? Certainly that the role of research should really be unquestioned in its desire to drive Paediatric Surgery forward to all new frontiers. There is little doubt that high quality research though does require a hybrid amalgamation of scientific translational research, randomized clinical trials and disease-specific registries.  There is also very much a role for quality retrospective case-control series as well and these, for the most part, did form the bulk of the analysis.  Each paediatric surgeon can now see where your unit stands in the League Table in relation to others and these types of rankings do say something about academic drive and enthusiasm in all UK paediatric surgical centres.