The history of fetal intervention for congenital diaphragmatic hernia (CDH) has been littered with false dawns and dashed hopes. The New England Journal of Medicine has recently published the results of the two TOTAL trials looking at the role of fetal tracheal occlusion (FETO). The question is are things any clearer?

A Little Bit of History

Dr Michael R Harrison – A Denis Browne BAPS Gold Medal winner in 2013 and acknowledged innovative pioneer worked energetically for many decades on fetal repair of CDH at UCSF San Francisco , USA to offset the unacceptably high mortality rate of the unborn patient. The open repair approach via a maternal hysterotomy was developed but later abandoned in the 1990’s with preterm labour, fetal morbidity and mortality seemingly unavoidable [1].

Dr Jay Wilson working at Children’s Hospital Boston Harvard University, USA in the 1990’s created and then advanced the original concept of tracheal occlusion exploiting principles of fetal lung liquid physiology and mechanics to stimulate pulmonary growth with dramatic outcomes shown in the CDH lamb model [2].  No surprise then that in 2003 the New England Journal of Medicine later published the 1st human randomized controlled trial led by Dr Michael Harrison and co-workers at San Francisco exploring hysterotomy-guided tracheal occlusion (FETENDO) in the high-risk CDH fetus vs expectant management in untreated controls [3].  Unfortunately, the trial was halted before it finished as it showed equivalent survival outcomes (70%) in both FETENDO vs non-treated expectantly-managed controls, implying that selection of what were deemed  “high-risk” fetuses was flawed.

Things moved next across the Atlantic with some new players entering the arena: Jan Deprest  from Leuven, Belgium and Kypros Nicolaides from Kings College Hospital, London. They started a clinical programme using a newer fetoscopic method of intubating the fetal trachea and occluding it using a detachable balloon (FETO) [4]. 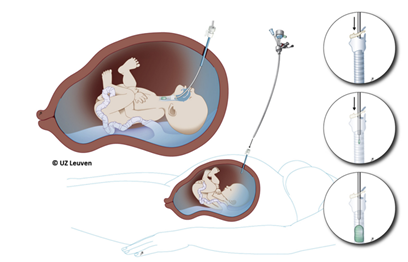 Early results suggested promise  and improved survival in “high-risk” fetuses with a predicted mortality of >90% [5].  Further evolution in fetal risk assessment produced the concept of observed/expected fetal lung-head-ratio (O/E LHR) and whether the liver was “up” or  “down”.

And so to past decade – although there had been a Brazilian trial RCT which had shown benefit [6] – the lack of a larger multi-centre randomized trial hampered its wide acceptance particularly back across the Atlantic.

The TOTAL trials have now looked at two risk groups: “severe” [7] and “moderate” left-sided CDH [8].  The “Severe Left CDH Trial”  identified 167 (12%) of 1,314 pregnant women carrying a CDH fetus who met inclusion criteria for trial entry and randomization to  either FETO vs expectant newborn CDH management at 27-29 weeks gestation. Of these, 80 subsequently participated then with 40 randomized to FETO intervention.  The primary outcome was survival to leave the neonatal intensive care unit, and 16 of 40 (40%) CDH fetuses in the FETO group achieved this vs. 6 of 40 (15%) managed expectantly at birth (P=0.009, with a relative risk of 2.7).  Secondary trial outcomes for CDH infants at 6 months of age were identical to their discharge survival.  Preterm birth was still a real issue, occurring in 30 of 40 (75%) women having FETO vs. 11 of 38 (29%) expectantly managed mothers.  Other outcome metrics notably premature rupture of membranes (PROM) was also x 4.5 fold higher in the FETO cohort.

The “Moderate Left CDH Trial” was larger involving 196 women with FETO performed a little later at 30-32 weeks and did not show significant survival benefits vs expectant post-natal care.  Though, 62 of 98 (63%) infants in the FETO group and 49 of 98 (50%) infants in the expectant care group survived to discharge (relative risk, 1.27; two-sided P=0.06).

Have these TOTAL trials brought about real advances in the delivery of health care for pregnant women, expectant couples, families and the fetus with CDH?  Given that only 12% of all pregnant women were eligible to enter the TOTAL  “Severe Left CDH trial”‘ after  a risk assessment it will therefore likely be reserved to only a small cohort.  The ‘risks vs benefits‘ for FETO eligibility should then ideally  be led co-operatively by MDT teams at Fetal Medicine Centres in consultation with key health care professionals including obstetricians, paediatric surgeons, and neonatologists [10].

It is clear that CDH will continue to remain an unsolved problem with an unacceptably high mortality and there is much work still to be done to drive better health outcomes for these very vulnerable patients and families.

Faculty Of Health And Life Sciences