The Denis Browne Gold Medal will, this year, be awarded to Professor George Youngson. 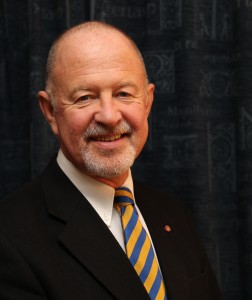 The medal this year will be awarded to Professor George Youngson.

George Youngson is Emeritus Professor of Paediatric surgery at the University of Aberdeen. He graduated from Aberdeen University in 1973 and received his training in Scotland and at the Hospital for Sick Children in Toronto. He was a consultant paediatric surgeon at Royal Aberdeen Children’s Hospital from 1984 to 2010. His main interests and contributions to paediatric surgery outside clinical surgery are in the field of surgical education. He served on the Intercollegiate Specialty Examination Board for 10 years and was its chair for six years during which time major revisions of the paediatric specialty fellowship took place.
He was Council Member, Director of Standards and then Vice President of the Royal College of surgeons of Edinburgh and promoted introduction of patient safety in general and non-technical skills for surgeons (NOTSS) in particular, into the surgical curricula of a number of countries including Australia, New Zealand, as well as the general surgical curriculum in USA.
He led a number of nationwide reviews of children’s surgical specialties in Scotland which resulted in reconfiguration in how services were delivered and was specialty advisor to the Chief Medical Officer. He was founding chairman of the Scottish Colleges Committee in Children’s Surgical Services and was awarded the CBE in the Queen’s Birthday Honours lists in 2009 for services to child health in Scotland. His other awards include the president’s medal of the Royal College of Surgeons of Edinburgh, the Rahima Dawood Medal from the College of Surgeons of East Central and Southern Africa (COSECSA) and the Keith Gold Medal from University of Aberdeen. He is an honorary lifetime member of the Australian New Zealand Association of Paediatric Surgeons (ANZAPS).
George succeeded Prof David Lloyd as chairman of the International affairs committee in Baps which has grown progressively to now effectively delivering courses in a variety of countries as well as promoting scholarships and fellowships and international international collaboration across several continents’.

He is currently chairman of the national network for children and young people with cancer in Scotland.

You can see Professor Youngson receive his medal at the Annual Congress in Cardiff.