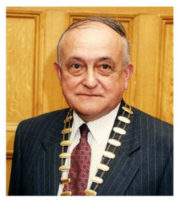 The death has been announced of Professor Edward Guiney. He passed peacefully at St Vincent’s Hospital, Dublin on 10th April 2018.

Eddie Guiney was born in 1931 in Dublin and educated at Belvedere College before going on to study medicine in University College Dublin and graduating in 1956. Eddie spent his postgraduate years working at St. Vincent’s Hospital in Dublin before moving to the Regional Hospital Galway in 1957 for two years where he was a senior house officer and registrar. In 1958 he moved back to Dublin as senior registrar and tutor in surgery in St. Vincent’s Hospital, completing a Master of Surgery (MCh) degree in 1961.

Having won a highly competitive Overseas Travelling Fellowship he started to explore the world with stints in St Thomas’s Hospital, London between 1960 – 1961 as a lecturer in surgery then as a Research Fellow in the prestigious Massachusetts General Hospital and the Harvard Medical School.

He returned to Ireland in 1965 and made the decision to enter the world of paediatric surgery. He became a senior surgical registrar in the Alder Hey Children’s Hospital in Liverpool before returning to Dublin as a consultant paediatric surgeon from 1966 in Our Lady’s Hospital for Sick Children, Crumlin and Temple Street Hospital, later adding a consultant appointment in 1970 at the National Children’s Hospital, Harcourt Street. He also helped to set up the national liver transplant programme at St. Vincent’s Hospital, Dublin. He retired from clinical practice in 1997 but maintained a close relationship with the Royal College of Surgeons in Ireland firstly as Professor (1991-97) then following retirement as teacher and anatomical prosector endowing the Edward Guiney Medal for Paediatric Surgery.

Eddie was always actively involved in research with a major interest in clinical and experimental liver transplantation, spina bifida and hydrocephalus. He published over 80 peer-reviewed papers. He was appointed as Director of Research at the Children’s Research Centre in 1976 a post he held until 1989.

On a personal level Eddie’s wife Sheila predeceased him in 2006. They had three children, Ed, Michael and Carina. Ed is an award-winning film producer and co-founder of Element Pictures.

Eddie Guiney was possessed of a great intellect, qualifying at the top of the class in University College Dublin. He was a skilled paediatric surgeon who treated sick children and their families with genuine kindness and caring. He will be sadly missed.

Abridged and originally published in UCD School of Medicine http://www.ucd.ie/medicine/news/